Dr. Carol Blocksome and others at Kansas State University have developed a video that explains prescribed burning in the Flint Hills region of Kansas to an urban audience. Numerous people from all aspects of fire were interviewed in making the video. Their participation has been critical to the success of the video.  Dr. Blocksome stated they had many excellent interviews and were not able to use much more than a small fraction of the footage in the 26 minute video, which was the time allotted to them by the television station.

This video can be found on the Great Plains Fire Science Exchange website or at their Facebook page. A bibliography detailing the science behind the video will also be available on this site.
A second, more technical video is being completed for producers that will go into more detail on methods to mitigate smoke from prescribed burning.  This will have some overlap with the urban video, but will include new footage. It will be available for agency staff and others that want to use it to promote adoption of the Kansas Flint Hills Smoke Management Plan. For more information please contact Kansas State University extension. 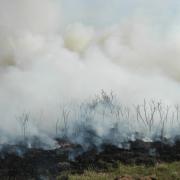 Kansas State University has just produced a smoke management video that explains prescribed burning in the Flint Hills region of Kansas to an urban audience.