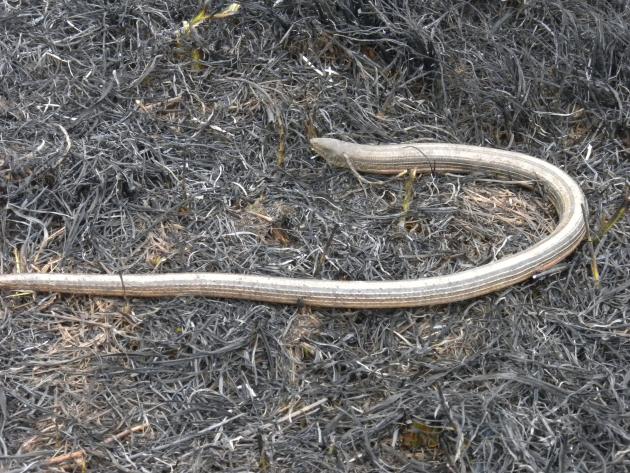 For most wildlife species, mortality from prescribed fire is small. Some species of reptiles such as this Western glass lizard appear to be more susceptible to mortality. However, failure to use fire will eventually result in the plant community being insufficient for these same species. Thus, some level of wildlife mortality is necessary to sustain the populations that are dependent on these fire adapted plant communities.

Prescribed fire is an important wildlife management practice that influences the structure and composition of plant communities.  This influences wildlife distribution and abundance across the landscape.  However, there are some concerns to consider when using prescribed fire, such as direct wildlife mortality.  While direct mortality is rare, there are some things that can be considered to minimize its occurrence.  However, the overall positive effects of fire outweigh any potential negatives in most instances.

While the vast majority of wildlife are able to avoid fire (either by escaping the burn unit or going underground), young wildlife will be particularly vulnerable.  Limited information exists on how much mortality fires cause, but it appears to be minimal in areas where fire historically occurred.  Ground nesting birds are susceptible to fire and this has long been recognized. However, limited research suggests that loses to ground nesting birds from fires conducted during the nesting season is minimal.  Yet, avoiding the primarily nesting period is advisable when possible, assuming the land manager can still maintain the appropriate fire frequency.

For most of the U.S., the primary nesting season for grassland birds is May-July.  While there is still reproduction taking place during August and September, the vast majority of nests are complete by this time.  Therefore, waiting until late July or August will avoid most chick mortality. Additionally, many bird species will renest if their first nest is lost to a fire.  Similarly, May and June have high numbers of deer fawns and young rabbits.  Reptiles are also at risk during early spring.  They are not as mobile as mammals and birds, and are more frequently killed by fire right after they come out of hibernation.  Some species in particular have shown high mortality rates such as glass lizards.  Reptiles and amphibians are most active during the summer months.  Summer fires often leave a refugia of unburned area that reptiles and small mammals may be able to escape to. However, it has been concluded that a landscape with a mosaic of burned and unburned areas has a higher diversity of reptile species.  Thus, while some reptile and amphibian mortality will occur, providing a diversity of plant composition and structure with fire would be beneficial in the long-term to the reptile and amphibian community as a whole.  Therefore, only a portion of the landscape should be burned each year.  This will also ensure that all species have the habitat requirements needed in that year.

While it is impossible to avoid wildlife mortality from prescribed fire, steps can be taken to reduce the incidence.  However, as mentioned earlier, maintaining the appropriate plant community for a species is much more critical than individual incidental mortality.  Thus, fire frequency must be the overriding factor for proper wildlife management.