The use of fire in the United States has decreased since settlement of European immigrants. This decline in fire use is due to fear of fire, fragmentation of landscapes by increased human population, farming and over-use by livestock. The lack of fire has resulted in a rapid change of landscapes, from open prairies or savannahs to closed canopy forests, and in many cases monocultures of certain species, such as eastern redcedar.

Not only has fire suppression caused a decline in native plant communities, but also the habitat specialist wildlife species that require these lost or declining landscapes. These species include Northern bobwhite, lesser prairie chicken and many songbirds. Fire is also very important for other wildlife species that are habitat generalists, such as wild turkey, white-tailed deer, and elk. 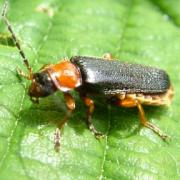 Soldier Beetles can have variations in coloration.

The most economically and ecologically sound tool to restore and maintain native landscapes is prescribed fire. The regular use of fire prevents invasion of eastern recedar into prairies, shrublands, and forests. Fire can also control resprouting woody plants when the frequency is at least every three years. Fire is an ecosystem driver that facilitates ecosystem processes, including nutrient cycling, water cycling, and soil health. Fire helps maintain water shed function, water quality, and water yield. In some cases, fire has been excluded for so long, that mechanical and/or chemical tools may be needed in the restoration process. In many ecosystems, fire is just as important as the soil or climate.

Small eastern redcedar infestations can be controlled by using hand-held shear/loppers, chainsaws, or brush cutters. These treatments need to be repeated at least every three years as new eastern redcedars will continue to rapidly invade. 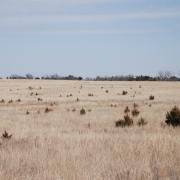 Proper grazing management is mandatory to ensure that enough fine fuel is available to carry a fire and burn eastern redcedars. If eastern redcedar trees are not controlled, stocking rates need to be reduced frequently to account for the loss of forage. Eventually eastern redcedar will become so thick that fire will not carry across the area, except under extreme wildfire conditions. 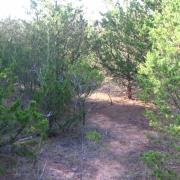 Heavy infestations by eastern recedar are very expensive to control and require heavy equipment. Hydraulic saws and clippers will produce the best results, but can be time consuming unless it is hired out or most of the managers time is spent cutting. Bulldozers can be very costly and cause soil disturbance, and are not recommended unless in extreme conditions. These treatments need to be followed by fire or the manager will be in the same situation.

The use of prescribed fire is the most recommended tool for eliminating eastern redcedar. A land management plan should exist on every piece of property to ensure the land is functioning at its highest potential.