The historical occurrence and role of fire in upland hardwood systems, especially oak-dominated forests, woodlands, and savannas, is well documented. Research throughout the eastern US has documented fire within upland hardwoods occurred, on average, every 2 – 24 years, with most occurring every 4 – 6 years. Fire occurred during all seasons. Some studies indicate fire was most prevalent in these systems during the dormant season, while others show a peak during May or during fall after leaf senescence. The majority of lightning-caused fires occur April – August in the eastern US, whereas fire spread by man, either native Americans or European Americans, has been most prevalent in late winter/early spring and fall.

Many foresters have been critical of using fire in hardwoods because of the potential to reduce timber value. Indeed, most hardwood species are not as resilient to fire as many pine species. However, any tree species can be damaged or killed by fire; it all depends on fire intensity. Although upland hardwoods can be burned without damaging timber, extra precaution is required when timber value is the primary objective, and the effect may not be worth the risk if growing high-quality timber is the primary objective.

Benefits of Fire in Hardwoods

The benefits of using prescribed fire in hardwood systems are essentially the same as in pine systems. Fire influences plant community composition and structure, reduces fuels, and recycles nutrients. Thus, prescribed burning can have a tremendous impact on succession of plant and animal communities, quality of wildlife habitat, and susceptibility to wildfire. When burning in hardwood systems, adjust the firing technique and timing to adjust fire intensity and meet objectives. 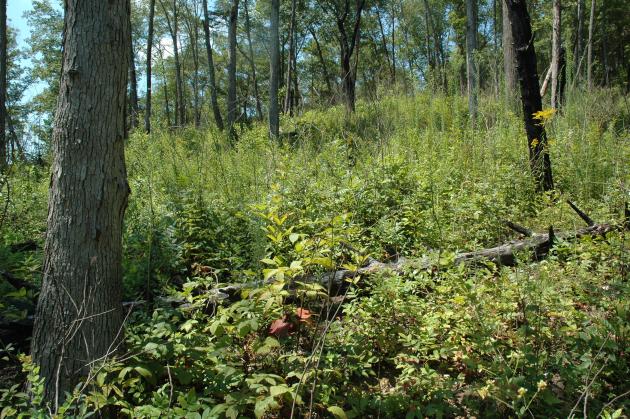 An improvement cut was implemented in this stand in 2004 to reduce canopy closure to about 60%. From 2004 to 2012, 2 dormant-season (March) fires and 2 late growing-season (September) fires were implemented to enhance understory structure and composition, primarily for wild turkeys and white-tailed deer. Relative coverage of herbaceous plants important to wild turkeys and deer has increased from 37% to 62%.

Relatively low-intensity fire with flame lengths of 6 – 18 inches should not harm overstory species unless there is debris at the base of the tree. Where timber quality is a consideration, it is necessary to move relatively large debris (>3 – 4 inches diameter) at least a couple feet away from the trunk of high-quality trees. When debris this large burns, heat is retained against the base of the trunk long enough to “cook” the cambium layer just inside the bark. Damage to the cambium layer can result in bark splitting or open wounds (often called “cat faces”) at the base of the tree, which may sometimes allow insects and disease to enter the tree and decrease timber quality or eventually kill the tree. In most stands, checking for debris against trunks does not take long and is easily accomplished by walking through the area a day or two before burning.

According to the objectives, some trees might need to die. Using moderate- to high-intensity fire will kill some trees and allow additional sunlight to enter the canopy and stimulate understory growth and development, which provides increased browse, soft mast and cover for many wildlife species. Most often, landowners will allow at least 20 – 30% sunlight into closed-canopy forests by reducing canopy closure through some type of harvest or thinning, which removes or kills specific trees and allows favored species to dominate the remaining stand. Low-intensity fire is then used to influence understory composition and structure without damaging remaining trees. When managing oak woodlands or savannas, moderate to high-intensity fire is used to maintain composition and structure without regard to timber quality.

Indeed, there are many situations when fire is beneficial or actually required to meet various management objectives in upland hardwood systems. Restoration of various ecological communities, such as oak woodlands and savannas, requires fire. Prescribed fire can also be used to improve habitat in upland hardwood forests for many wildlife species and eliminate the potential damage of wildfire for several years.