Prescribed fire is the most economical method to control ash juniper and eastern redcedar in the Great Plains. But many times these trees are too large by the time land managers use fire to control them. In this case, the lower leaves will turn brown and eventually fall off with the remaining upper portion of the tree staying green and living. Shortly after a prescribed fire is conducted, when the lower leaves of these juniper trees become brown, is a good time to conduct individual tree ignition.

Individual scorched-tree ignition is a very economical follow-up to prescribed burning and can be done over a period of several weeks. Ignition of these trees can be accomplished with a propane weed burner torch, drip torch, hand held propane or MAP gas torch. It is best to do individual tree ignition when the wind is very light or calm so the heat and flames can draw straight up into the crown of the tree, killing the entire tree.

Remember to have fire fighting equipment on stand by in case embers from crowning trees drift into unburned areas. Also be sure to notify the local authorities and neighbors before re-burning trees.  The the smoke and flames that this technique creates from crowning trees will be visible to neighbors.  Always be sure to follow all local and state laws regarding the use of fire. 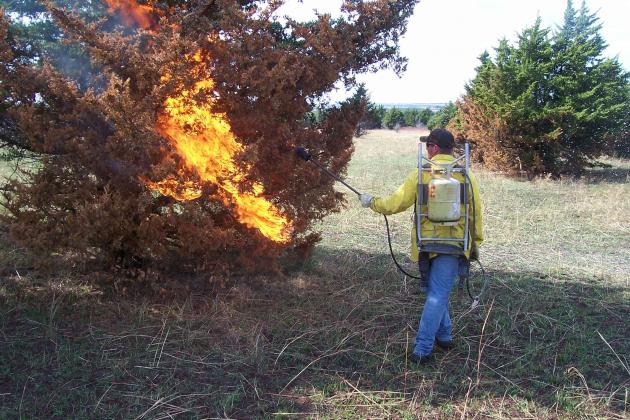 With proper conditions you can ignite a single point on smaller trees or several point on larger trees along the browned lower branches on the upwind side. 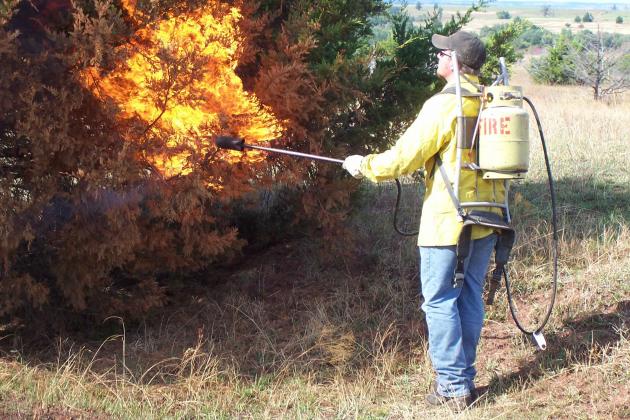 How to influence smoke

Smoke includes a mix of chemicals including bits of the unconsumed fuel. Unconsumed fuel on the ground leads to smoldering phase burning. Smoldering produces more smoke than burning in the flaming stage of ignition. Ignition techniques that lead to more complete combustion should produce less smoke than other techniques. Here are some examples. 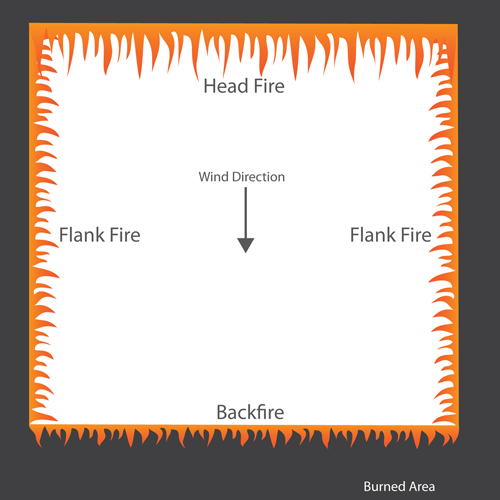 Parts of a fire.

2. Headfire. Headfires (burn with the wind) move more quickly, produce more heat, generally consume fuel less completely, and produce taller flame lengths. Incomplete fuel combustion results in greater smoke production than backfires. Although headfires may produce more smoke, they may be used to complete a fire more quickly, thereby reducing the overall burn time. Furthermore, the speed and intensity of headfires releases more heat that can help the smoke to rise in a column, facilitating dispersal at higher levels in the atmosphere. Headfires can also be more challenging to conduct safely if used exclusively.

3. Ring headfire. This technique uses a combination of back, flank, and head fires. Backfires and flanking fires are used around the perimeter to create a safe black zone to send the headfire towards. This technique is often used because of its safety and compromise in completion time. The backfire portion of the fireline may be less smoky, but generates steady amounts of heat so when the headfire begins, smoke forms a column and is dispersed aloft. The placement of the head and backfire zones can be adjusted to avoid smoke in sensitive areas and apply the right flame length/residence time combination to treat fuels in different parts of the burn unit. Ring headfires are generally not recommended when wildlife is a consideration because animals may be entrapped.

4. Additional techniques, such as chevron, single point ignition, and strip head-firing, are often used to speed the development of a safe zone around a burn unit perimeter. These techniques can also be applied to create pulses of heat to lift smoke aloft. Keep in mind that head fires typically produce more smoke through incomplete ignition and subsequent smoldering, but generate high levels of heat. Size of the strips used with these techniques can make a huge difference. Large strips may produce more smoke, but because of increased heat production, the smoke is lofted higher more quickly than with smaller strips. A quick completion of a burn can reduce the time of potential exposure to smoke though generating more smoke in the short period.

When choosing an ignition technique, consider many factors, including smoke, and prioritize them with respect to objectives and risks.