Three of the most commonly used tools for managing native plant communities are fire, grazing and rest. Unfortunately, many land managers do not understand when and how to use these tools; rather, many try to manage native communities primarily with other tools such as mowing, bulldozing, herbicides, tillage or planting. Although, these other tools can be useful and appropriate in certain situations, they should be considered supplemental or secondary tools, but usually are not the primary tools for effectively and economically managing native plant communities. 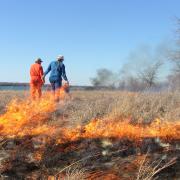 Fire, grazing and weather extremes are the primary disturbances that historically impacted native plant communities. Depending upon severity, these disturbances retard succession or maintain a successional state, while rest from disturbances during periods of adequate rainfall advances succession. Historically, many upland communities burned frequently either through lightning strike or due to man. Without fire, abundance and dominance of some species such as several native legumes decrease, while abundance and dominance of some species such as juniper increase. Without fire, prairie commonly changes into woodland. Excessive dominance by native forbs such as western ragweed, annual broomweed, bitter sneezeweed or horseweed indicates heavy disturbance, which may be excessive for some goals, and often indicates the need for rest.

Other Tools May Be Appropriate in Certain Situations

Even though fire, grazing and rest are the disturbances that native plant communities developed under, sometimes other tools can be appropriate. It may be necessary and appropriate to use a bulldozer, chain saw or tractor-mounted shear to remove woody cover when fire has been excluded from an area for too many years. Spot treatment with an herbicide might be appropriate when addressing a non-native invasive plant because such plants are not part of the native ecology and control may require extraordinary measures. Planting and or fertilization may be appropriate when native seed bank and soil characteristics have been altered through decades of cultivation or herbicide treatments.

Range conservationists, wildlife biologists, and foresters can help land managers better understand and manage native plant communities. Such assistance is often available from state organizations such as state extension services, state wildlife or conservation agencies, and state forestry services, federal agencies such as the Natural Resources Conservation Service, and US Fish and Wildlife Service, and private organizations such as The Samuel Roberts Noble Foundation and The Nature Conservancy.